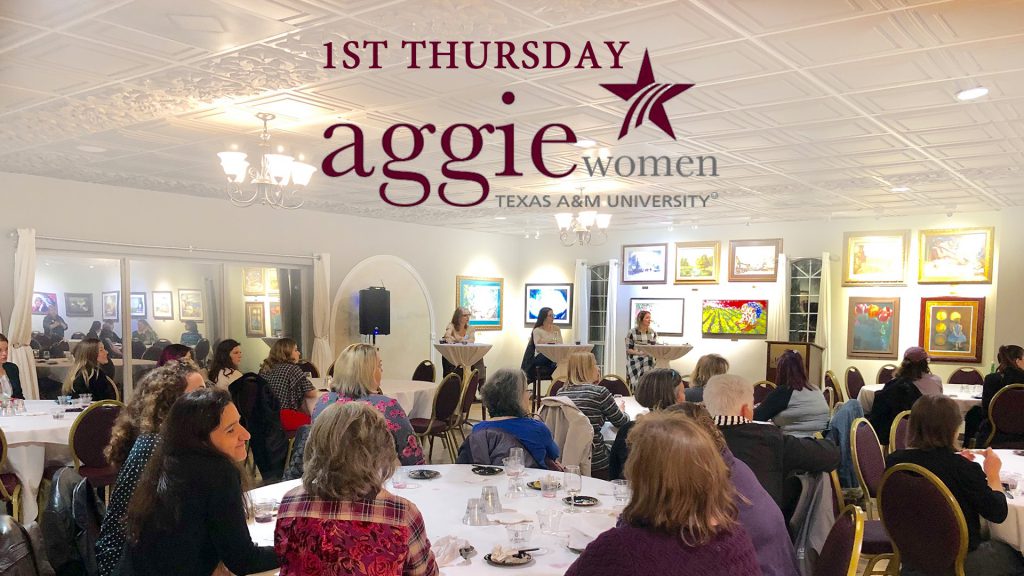 The Texas A&M Women's Resource Center, the Aggie Women Network and Messina Hof Winery & Resort would like to invite all Texas A&M community members to attend our monthly First Thursday Speaker Series. The First Thursday Speaker Series connects current and former students with community members and professionals to provide uplifting guidance over a range of topics. Each event is a new opportunity for participants to network and learn from our panel of professionals.

The First Thursday Speaker Series runs from 6 p.m. to 7:30 p.m. on the first Thursday of the month during the fall and spring semesters.

The Women’s Resource Center will track check-in and check-out for students seeking extra credit for attending a First Thursday Speaker Series event.  During the event, students will be given a link to check-in and check out of the event.  The week following the event, student’s attendance information will be sent to their course instructor(s).  It is the student’s responsibility to remember to check-in and out of the event. Extra credit will only be given to students who are in the Zoom meeting, not those watching on Facebook.

Being a Woman in a Career Field: Finding Your Balance

Women with careers often must juggle many responsibilities and roles; it is often difficult to find a balance. Hear women of different career fields discuss their experiences in finding their own balance. In this session, we will discuss common barriers to women with careers and provide practical tips for juggling it all.

Anushree Jumde '14 was born in India and was raised in both India and Little Rock, Arkansas. She graduated from the University of Central Arkansas (UCA) with a bachelor’s degree in Environmental Science - Planning and Administration. She graduated with a master’s degree in Public Service and Administration in 2014. After graduation, she started her career as a congressional staffer for Rep. Tim Griffin (AR-02) and then was hired to work for Rep. French Hill (AR-02) in 2015. She worked her way up from a representative to the position of District Director in 2017. In her free time, she enjoys spending time volunteering, exploring central Arkansas, and reading.

Trasa Cobern '97 is an award-winning educator, mother, a board member for two local non-profits in the DFW area. She graduated from Texas A&M University cum laude, with University and Foundation Honors, with a B.A. in political science. Trasa has written and published multiple history-based articles, some of which focus on the Medal of Honor Program, a passion of hers from her life growing up as a military BRAT. Trasa firmly advocates for civic involvement and volunteerism in causes that stir one's passions. If you cannot tell, she is busy...but she prioritizes the things that she believes in, and always chooses sanity over activity. "Balance" is a key component of her life.

Saundra Stroope '88 is a human resources leader, coach, and consultant. In addition, she is the author of over a dozen works including a book on career development strategies for women titled Breakthrough: Career Strategies for Women’s Success published by Business Expert Press. Saundra holds a bachelor’s degree in Psychology and a Master’s in Human Resources Management from Texas A&M University. Saundra lives in Salt Lake City, UT and serves as the President of the Texas A&M Club of Utah.

For the safety of our participants, all First Thursday Speaker Series events will be hosted online via Zoom and Facebook Live until we are able to safely gather at the Messina Hof Winery & Resort. Please register using the links below:

Questions about the First Thursday Speaker Series should be directed to Ashley Justynski, Graduate Assistant for the Women's Resource Center, at ashleyj@studentlife.tamu.edu or at 979.845.8784.