IN HER OWN WORDS: A WRC BOOK CLUB We are excited to gather in community to discuss some awesome women authors. We have expanded our summer book club into a regularly occurring book club called In Her Own Words. In Her Own Words will take place during both winter and summer breaks.

In Her Own Words will take place in June-July and again in December-January. Anyone affiliated with the university is welcome to participate. Our meeting times will vary with each book. Please fill out the form below to register for the book club meeting. Unfortunately, the Women's Resource Center is not able to provide books to all participants. Book give-a-ways are only open to current students. We encourage you to check your local library for copies of the books. If you purchase the books from Amazon, remember to use Amazon Smile and select the organization of your choice to receive some of your proceeds.

The next In Her Own Words meeting will take place on January 12, 2023. Voting for the book selection will happen via our Instagram in November 2022. The WRC will have 20 copies of each book available for pick up in December at the Student Services building for the first 20 individuals who register for book club. Recipients will be contacted individually. Snow Flower and The Secret Fan by Lisa See

In nineteenth-century China, when wives and daughters were foot-bound and lived in almost total seclusion, the women in one remote Hunan county developed their own secret code for communication: nu shu (“women’s writing”). Some girls were paired with laotongs, “old sames,” in emotional matches that lasted throughout their lives. They painted letters on fans, embroidered messages on handkerchiefs, and composed stories, thereby reaching out of their isolation to share their hopes, dreams, and accomplishments.

With the arrival of a silk fan on which Snow Flower has composed for Lily a poem of introduction in nu shu, their friendship is sealed and they become “old sames” at the tender age of seven. As the years pass, through famine and rebellion, they reflect upon their arranged marriages, loneliness, and the joys and tragedies of motherhood. The two find solace, developing a bond that keeps their spirits alive. But when a misunderstanding arises, their lifelong friendship suddenly threatens to tear apart.

Snow Flower and the Secret Fan is a brilliantly realistic journey back to an era of Chinese history that is as deeply moving as it is sorrowful. With the period detail and deep resonance of Memoirs of a Geisha, this lyrical and emotionally charged novel delves into one of the most mysterious of human relationships: female friendship. 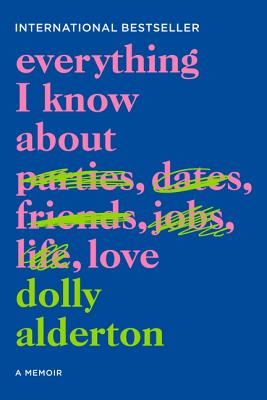 The wildly funny, occasionally heartbreaking internationally bestselling memoir about growing up, growing older, and learning to navigate friendships, jobs, loss, and love along the ride

When it comes to the trials and triumphs of becoming an adult, journalist and former Sunday Times columnist Dolly Alderton has seen and tried it all. In her memoir, she vividly recounts falling in love, finding a job, getting drunk, getting dumped, realizing that Ivan from the corner shop might just be the only reliable man in her life, and that absolutely no one can ever compare to her best girlfriends. Everything I Know About Love is about bad dates, good friends and—above all else— realizing that you are enough.

Glittering with wit and insight, heart and humor, Dolly Alderton’s unforgettable debut weaves together personal stories, satirical observations, a series of lists, recipes, and other vignettes that will strike a chord of recognition with women of every age—making you want to pick up the phone and tell your best friends all about it. Like Bridget Jones’ Diary but all true, Everything I Know About Love is about the struggles of early adulthood in all its terrifying and hopeful uncertainty.

Ariadne, Princess of Crete, grows up greeting the dawn from her beautiful dancing floor and listening to her nursemaid's stories of gods and heroes. But beneath her golden palace echo the ever-present hoofbeats of her brother, the Minotaur, a monster who demands blood sacrifice.

When Theseus, the Prince of Athens, arrives to vanquish the beast, Ariadne sees in his green eyes not a threat but an escape. Defying the gods, betraying her family and country, and risking everything for love, Ariadne helps Theseus kill the Minotaur. But will Ariadne's decision ensure her happy ending? And what of Phaedra, the beloved younger sister she leaves behind?

Hypnotic, propulsive, and utterly transporting, Jennifer Saint's Ariadne forges a new epic, one that puts the forgotten women of Greek mythology back at the heart of the story, as they strive for a better world. Aging and reclusive Hollywood movie icon Evelyn Hugo is finally ready to tell the truth about her glamorous and scandalous life. But when she chooses unknown magazine reporter Monique Grant for the job, no one is more astounded than Monique herself. Why her? Why now?

Monique is not exactly on top of the world. Her husband has left her, and her professional life is going nowhere. Regardless of why Evelyn has selected her to write her biography, Monique is determined to use this opportunity to jumpstart her career.

Summoned to Evelyn’s luxurious apartment, Monique listens in fascination as the actress tells her story. From making her way to Los Angeles in the 1950s to her decision to leave show business in the ‘80s, and, of course, the seven husbands along the way, Evelyn unspools a tale of ruthless ambition, unexpected friendship, and a great forbidden love. Monique begins to feel a very real connection to the legendary star, but as Evelyn’s story near its conclusion, it becomes clear that her life intersects with Monique’s own in tragic and irreversible ways. Divided into five chapters and illustrated by Kaur, the sun and her flowers is a journey of wilting, falling, rooting, rising, and blooming. A celebration of love in all its forms. "this is the recipe of life said my mother as she held me in her arms as i wept think of those flowers you plant in the garden each year they will teach you that people too must wilt fall root rise in order to bloom". Soulful and uproarious, forceful and tender, Untamed is both an intimate memoir and a galvanizing wake-up call. It is the story of how one woman learned that a responsible mother is not one who slowly dies for her children, but one who shows them how to fully live. It is the story of navigating divorce, forming a new blended family, and discovering that the brokenness or wholeness of a family depends not on its structure but on each member’s ability to bring her full self to the table. And it is the story of how each of us can begin to trust ourselves enough to set boundaries, make peace with our bodies, honor our anger and heartbreak, and unleash our truest, wildest instincts so that we become women who can finally look at ourselves and say: There She Is. In her memoir, a work of deep reflection and mesmerizing storytelling, Michelle Obama invites readers into her world, chronicling the experiences that have shaped her—from her childhood on the South Side of Chicago to her years as an executive balancing the demands of motherhood and work, to her time spent at the world’s most famous address. With unerring honesty and lively wit, she describes her triumphs and her disappointments, both public and private, telling her full story as she has lived it—in her own words and on her own terms. Ordered by military officials never to reveal the scope of their war work, these women and their incredible stories and accomplishments were all but written out of history until Mundy discovered a cache of recently declassified documents at the archives of the NSA. Based on these documents, other rich archival sources, and interviews with the women themselves, CODE GIRLS offers a page-turning narrative of broad popular appeal while establishing a vital new historical record; and it brings to life this riveting story of American courage, service, and scientific accomplishment.